Fleas can make your pets itch and cause considerable discomfort. Fleas may also cause considerable health issues for your pets. That's why it's critical to kill fleas quickly, before they can lay eggs. To protect your pet and home from fleas, it helps to understand the flea lifecycle. A flea has a life cycle that consists of four main stages: egg, larva, pupa, and adult. Generally speaking and depending on environmental conditions (temperature and humidity - the optimal being warm and humid - ideal New Orleans weather!), the total flea life cycle can range from a couple weeks to several months.

A flea can begin feeding on your pet within seconds. And within 24 hours of its first blood meal, a flea can begin laying eggs, resulting in an infestation. A single adult female flea can lay approximately 40 eggs every day and up to 2,000 to 5,000 eggs in her lifetime, usually on the host itself. These eggs are not sticky like most insect eggs, which means that the eggs can easily fall off the animal and roll onto the ground - the carpet, the pet's bedding, etc. - allowing them to be disbursed throughout the environment, Because of this, areas where the host spends most of their time (a pets' bedding) become one of the primary habitats of eggs and developing fleas. Eggs represent approximately 50 percent of the entire flea population in the average home. Depending on environmental conditions, the eggs can take anywhere from two days to two weeks to develop and hatch. When they emerge, the next stage, known as larvae stage, begins. 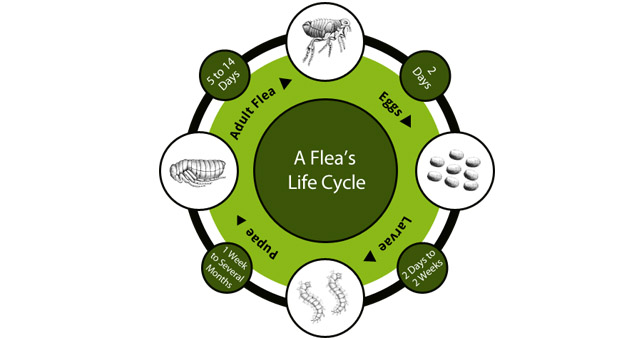 Flea larvae can be up to 1/4 inch long and are opaque and legless. The emerging larvae are blind and will avoid light. They develop over several weeks by feeding on any available organic material such as dead insects and adult flea feces, which consists mostly of dried blood. Larvae are about 35 percent of the flea population in the average household. Indoors, flea larvae tend to live deep in the carpeting and under furniture and baseboards. Outside, they thrive in shaded areas - under leaves and debris - typically wherever your pet seeks shelter from the heat or cold. Fleas live in the larvae stage anywhere from one to three weeks, then the larvae spin silken cocoons and pupate.

The cocoon protects the developing flea from the environment (even from insecticides) waiting for the adult flea to emerge. A pupating flea may remain at rest for several days, weeks, months... even up to a year or more waiting on the right conditions before emerging. It is not all that uncommon for pupae to overwinter in this state. Vibrations, even sound vibrations, heat, humidity and carbon dioxide are all signals to the pupae that a blood meal may be nearby, aiding the flea to emerge from their cocoons, bringing us full cycle back to the adult flea. The pupae stage represents about 10 percent of the flea population in the average home.

NOTE: The cocoon serves to protect the developing adults from chemicals. So though you may have had a flea treatment, the treatment cannot kill the fleas within the cocoons. They must emerge from their cocoons while the chemical that was laid is still active (most chemicals today have a residual effect, meaning it will last beyond the drying point). Also, these cocoons have a sticky outer coating that allows them to hide deep in the carpeting and not be easily removed by light vacuuming or sweeping. That is why it is highly important to maintain a rigorous vacuum routine in order for the fleas to emerge from their cocoons while the chemical is still active. This should be done daily until the problem is under control.

New adult fleas have a flat-bodied appearance, and are very small and dark in color. Once they feed, they will become larger and lighter in color. There are hair-like bristles on the flea body and legs to aid in their navigation through pet hair. Fleas have 3 pairs of legs, the hindmost pair designed for jumping. And most of us are familiar with how well a flea can jump!

Once the flea reaches adulthood, its primary goal is to find blood and then to reproduce. It's total life span can be as short as one year, but may be several years in ideal conditions. Although, generally speaking, an adult flea only lives for 2 or 3 months. And without a host for food, a flea's life might be as short as a few days. Adult fleas prefer to live on the animal and their diet consists of blood meals courtesy of the host animal.

Adult fleas account for less than 5 percent of the entire flea population in a home. The entire life cycle is quite variable, as evidenced by the variability in each life stage progression. As mentioned above, the cycle can be as short as two weeks or as long as two years. That is why it is so important to remain vigilant, even when a flea problem is thought to be under control!